NASA selected BALL AEROSPACE to adapt its Ball Commercial Platform 2000 (BCP 2000) spacecraft bus for the laser altimetry mission. The entire satellite will be assembled at Ball facilities in Boulder, Colo., and will be controlled on-orbit by the University of Colorado.

Originally designed to accommodate high-resolution cameras that acquire half-meter class imagery, the spacecraft is well suited to the ICESat precision pointing control and knowledge requirements, and also can rapidly orient toward any point within 5 degrees of the ground track. 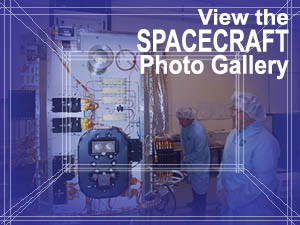 The spacecraft is a fully redundant design that provides a probability of success of >86% for a 5-year mission life. The spacecraft bus and payload are powered by two single-axis articulated solar array wings, consisting of three winglets each. Two star trackers provide precision pointing and stability. A fixed X-band antenna is mounted on a post to provide a high bandwidth downlink. Spacecraft command and telemetry uplink/downlink on S-band frequency allows for simultaneous command and telemetry operation. The attitude control and determination subsystem is designed to allow payload operation from any orientation, and provides rapid slewing, tracking of targets, and minimizes vibrations and induced jitter. Two BlackJack GPS receivers from NASA's Jet Propulsion Laboratory provide precision orbit determination, timing and geolocation. A hydrazine propulsion system corrects for any launch insertion errors, and maintains the correct orbit for ground track repeatability.

The spacecraft will be launched on a Boeing Delta II launch vehicle. ICESat will be placed into a 94 degree inclination so each successive ground track will precess to the West as the Earth rotates, at an initial altitiude 590 km above the Earth. ICESat's designed lifetime is for three years of operation with a five-year goal.