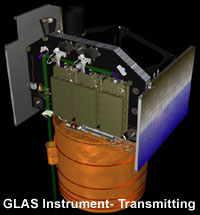 GLAS (the Geoscience Laser Altimeter System) is the first laser-ranging (lidar) instrument for continuous global observations of Earth, which will make unique atmospheric observations as an important component of the ESE climate change program. GLAS is a facility instrument designed to measure ice-sheet topography and associated temporal changes, cloud and atmospheric properties.and give us information on the height and thickness of radiatively important cloud layers which is needed for accurate short term climate and weather prediction. In addition, operation of GLAS over land and water will provide along-track topography. 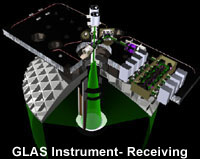 GLAS includes a laser system to measure distance, a Global Positioning System (GPS) receiver, and a star-tracker attitude determination system. The laser will transmit short pulses (4 nano seconds) of infrared light (1064 nanometers wavelength) and visible green light (532 nanometers). Photons reflected back to the spacecraft from the surface of the Earth and from the atmosphere, including the inside of clouds, will be collected in a 1 meter diameter telescope. Laser pulses at 40 times per second will illuminate spots (footprints) 70 meters in diameter, spaced at 170-meter intervals along Earth's surface.

For more information on the GLAS instrument visit these related web sites: